The NEAR wallet is down again – these are valid alternatives

While the NEAR Wallet is a go-to option for many NEAR protocol users, there are times when it experiences unexpected outages and technical issues. This is related to the fact that the NEAR Wallet is considered a legacy application that will soon serve a different purpose.

Just yesterday, September 22, Pagoda Platform, the main contributors to the core of the NEAR open source protocol, tweeted: 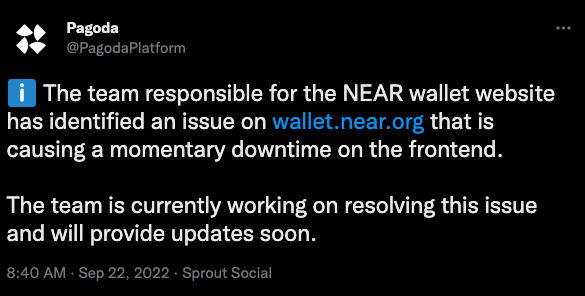 There seemed to be an issue on the frontend of the website which should be a quick fix. The Pagoda account came back with an update, tweeting that the NEAR Wallet team had identified an SSL configuration issue with the frontend hosting provider and were actively working to restore the site while preparing a fallback option. emergency.

The whole problem was likely caused by a breakdown in the NEAR protocol infrastructure which has since been fixed, and all associated wallets should be back up and running, according to the team leader. Twitter. Also, according to the NEARthe NEAR Wallet app will soon be retired and users will be encouraged to switch to other compatible wallets.

During this time, these types of technical issues have occurred and may reoccur which would keep users worried until things return to normal. Therefore, it is crucial to know what are the good NEAR wallet alternatives that you can trust to have peace of mind. In this article, we will discuss the best alternative wallets that work on the NEAR protocol and the features they offer.

MyNearWallet is a non-custodial wallet developed by Kikimora Laboratories to store and stake NEAR tokens and other compatible assets. 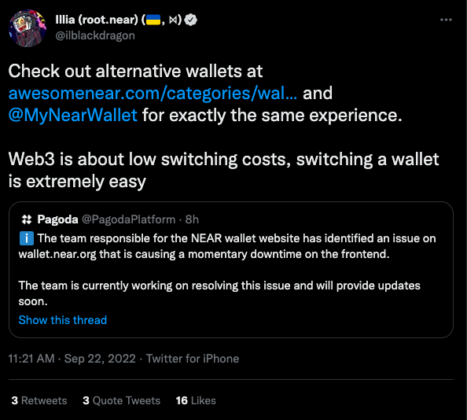 The team behind MyNearWallet has developed its project alongside the growth of the NEAR protocol ecosystem, and continues to work on both supporting legacy wallet features and adding new ones. The MyNearWallet team prioritizes constantly updating its users on any issues or changes. They actively communicate on social networks and in their blog on Medium. The platform also offers responsive live chat support, and a user-friendly interface will make the transition smooth and seamless.

You can easily import your existing wallet, by following this step by step guide in the official support of the wallet. Once your account is recovered, you can start sending and receiving transactions and staking your assets with MyNearWallet.

NearPay is a custodial crypto wallet that runs on the NEAR protocol. It is an easy way to store, buy and trade cryptos. It allows users to buy cryptocurrency with a debit or credit card, convert crypto to fiat, and withdraw funds to a bank account. NearPay users can also spend crypto assets with a prepaid crypto card, which is available to residents of the European Economic Area (EEA) and the United Kingdom. The virtual card is already available for users, while the plastic version is announced to be launched in the near future.

NearPay’s support team is available to help users with any questions or concerns. The wallet app is available on web, iOS, and Android, and supports 38 cryptocurrencies, including NEAR, BTC, ETH, and USDT.

The HERE portfolio is a mobile iOS wallet for the NEAR protocol. The app can be used to buy, sell and use NEAR and compatible assets.

Features of this wallet app include BTC payments with 0% fees, up to 10% APY stake, and instant withdrawals. New users can buy up to $1,000 worth of crypto without having to complete the KYC verification process.

Users also have access to all dApps through the HERE wallet’s ability to integrate with the NEAR web wallet.

Thinking about the future

If you are an active user of NEAR and need reassurance that you can still access funds, one of the wallet apps described above can be a great alternative to the old wallet.near.org.

As NEAR moves towards decentralization, wallet.near.org will eventually serve as the landing page for all compatible wallets operating within the ecosystem. The NEAR team intends to give users more choice when browsing the Web3 space. It adopts a similar strategy with wallets as NEAR has always believed in a multi-chain world.

Since the NEAR Protocol team is no longer working on the original web wallet, it may not be updated and maintained as frequently as other newer apps. As part of the transition, NEAR wallet users will be encouraged to migrate their wallet to a new provider. NEAR holders as well as holders of other crypto assets can enjoy a variety of features and incentives with these new apps.

British Columbia has the lowest financial support for seniors in Canada